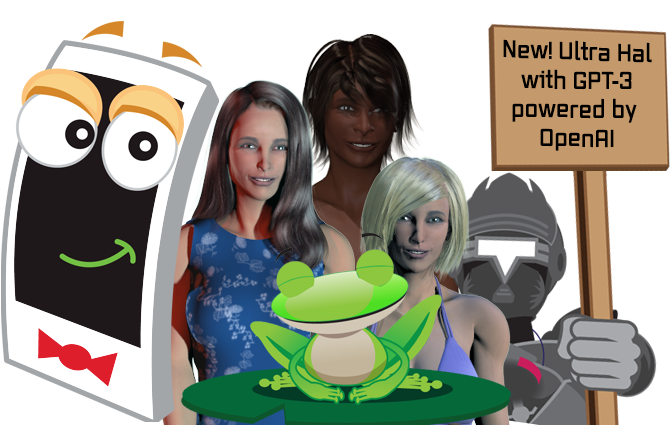 Zabaware's technology is built in a modular fashion with user-customizability a central tenant. Every part of Ultra Hal is a plug-in: the brain, the voices, the character animation engine, functionality like appointments, etc. If you are a developer or wish to tinker with Hal's inner workings, this page is for you.

Ultra Hal's brain is controlled by a VBScript with access to natural language functions and the WordNet lexical database through COM objects. Hal's knowledge is stored in an SQLite2 database. Included with Ultra Hal an application called the Ultra Hal Brain Editor which you can use to modify either Hal's database or VBScript. The code is well commented and should be easy to understand if you are familiar with VBScript. We have available a developer's guide for an older versin of Ultra Hal, version 5.0. This guide is out of date but may still be usefull as an introduction to VBScript and the core workings of Ultra Hal. If you wish to delve deeper into Hal's SQLite2 database than the included Brain Editor can provide, we recommend the tool SQLite Studio

Interfacing with Hal over the Web

A new version of the server edition of Ultra Hal is under development. When complete you will have a web interface to customize Ultra Hal with including JSON-RPC and XML-RPC access to our servers so that you can build your own web or mobile apps. Check back to this page in the future to check our progress.

Ultra Hal's interface is fully skinable. Read this PDF tutorial to learn how to make your own skins. The transparency creation tool referenced in this document is available here.

Ultra Hal is compatible with the Haptek character engine. Check out haptek.com to learn more about creating characters for this engine. They offer a very easy to use tool called People Putty to create new characters with. To use People Putty characters with Ultra Hal simply save the file as a haptar (with .htr extension) and drop in Hal's character folder (C:\Program Files (x86)\Zabaware\Ultra Hal Assistant 6\Characters) Be sure to check out the Zabaware forum to learn about some advanced techniques used by character authors.